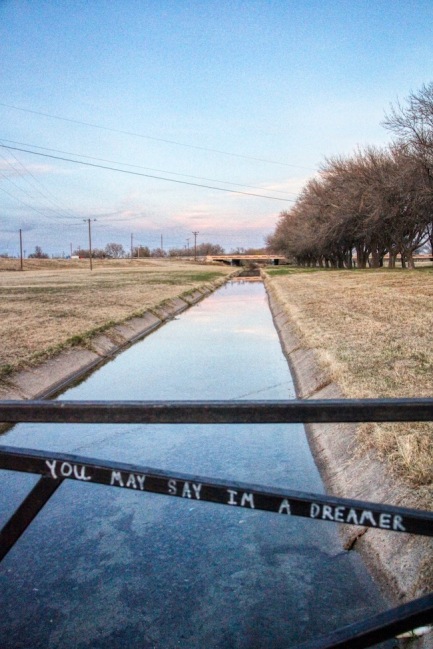 “You may say I’m a dreamer.” Looking downstream from the pedestrian bridge.

I traveled out to Fort Stockton to check in on Comanche Springs (and talk with the county about flood control) in mid-January. The springs started flowing again on Christmas Day and are now chugging at about 10 cubic feet per second, which is equivalent to about 4,500 gallons per minute or 6.5 million gallons per day. That’s a lot of water! I decided on a whim to film a field trip starting from the bottom and working up, so if you are really, really interested, you can watch the videos below. If you just want to watch one, I suggest you watch the one on the diversion dam where I risk my life through snakes, hummocky turf, unfriendly plants, a ghostly mirage, and an epic case of diarrhea.

I arrived in Fort Stockton just before dusk and immediately pulled off where what I call the eastern canal emerges from underneath Interstate 10. I was pleasantly surprised to see that the Pecos County Water Control and Improvement District #1 had been busy cleaning up the brush making it far easier to see the flow as well as the original infrastructure from when the canals served downspring irrigators. It was this clean-up that inspired me to record some videos to share.

The photo above shows where the canal emerges and also where it almost immediately enters into an old siphon under Comanche Creek. The siphon emerges on the opposite shoreline, but, because the siphon has been compromised, the water now flows directly into Comanche Creek. Later, I startled some ducks enjoying the small lake that’s formed in the creek bed.

Clearer view of the siphon pipe.

Looking back towards the siphon and the flow into Comanche Creek.

Next, I stopped at what I call the western canal but is noted in Google Maps as the Highline Ditch. Here, the Improvement District had dammed up the canal just as it emerges from underneath the interstate. This canal goes all to hell before it reaches Stone Road and was dumping out into long-abandoned fields before the damming.

Next stop was the canal on the south side of the interstate just before it splits into the eastern and western canals. Again, the good folks at the Improvement District had cleaned up the brush revealing a beautifully clear view of the old infrastructure. The photo below show where the canals split with the eastern/Highline flow heading out the lower left of the photo and the eastern flow heading through the diversion gate toward the concrete culverts you can see in the photo.

I jumped around a bit after this in real time, but to keep with the theme of heading upstream toward the springs, our next stop will be at the diversion dam. In the video below, I muff up the explanation of the diversion dam. The diversion dam creates a build-up of water that directs flow toward the diversion canal, which is what we’ve seen above. Flows that produce a water level higher than the top of the dam will then move downstream in the creek. This helps to keep flow in the canal from exceeding a certain level. My guess is that the dam was designed to divert all of the springflow into the canal and pass flood flows down the creek.

Next stop is the springflow outlet from underneath the pool where the primary spring, Big Chief, issues. I was able catch some gorgeous sunset shots here as well as the evening progressed. 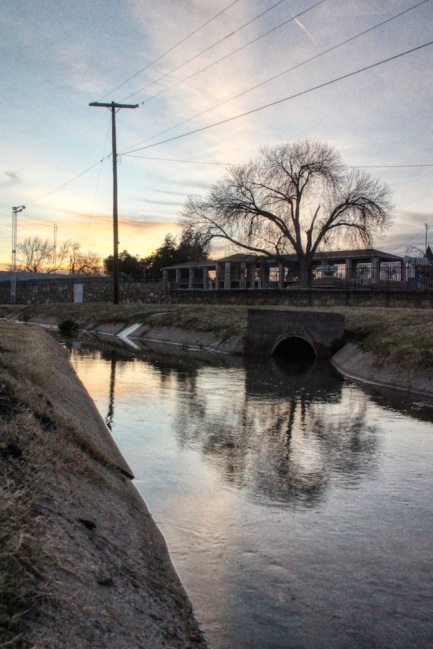 The discharge pipe from the pool in the foreground (and the resulting backflow upstream) with the poolhouse in the background.

Looking upstream toward the poolhouse.

Looking upstream toward the pedestrian bridge. 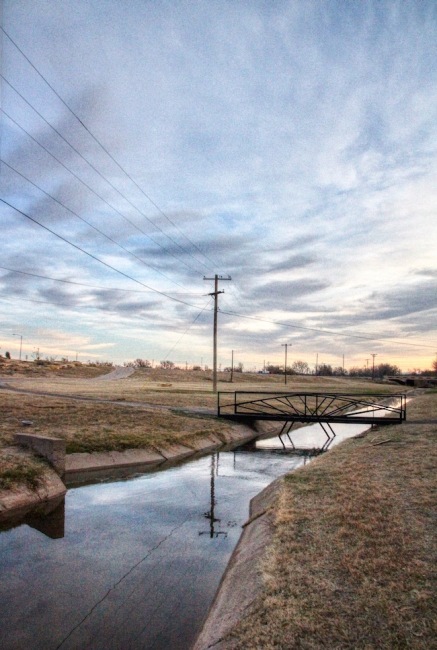 Looking downstream toward the pedestrian bridge. To the left (unseen in this photo) is the poolhouse. The “notch” on the left side of the canal  in this photo is where the discharge pipe from the pool emerges (and where the vast majority of springflow is coming from). 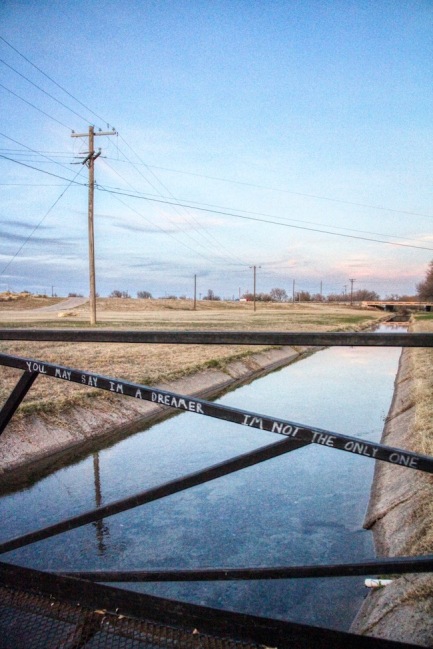 Looking downstream from the pedestrian bridge just below the discharge pipe from the pool. “You say I’m a dreamer. I’m not the only one.”

The pedestrian bridge is where we’ve been working with the groundwater conservation district, whose offices are a convenient stroll from here, to measure flows in the canal on a weekly basis. 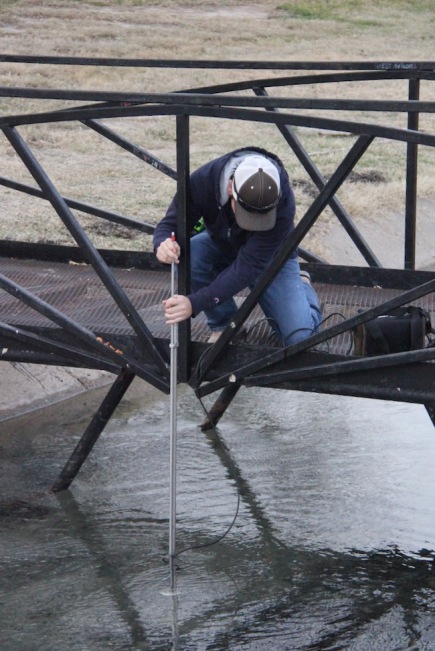 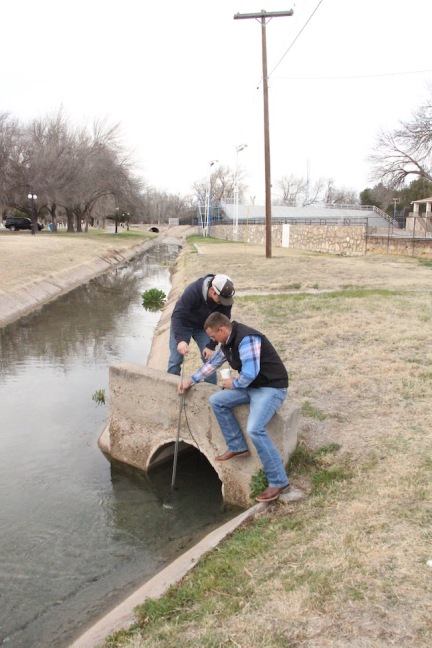 The Derp Tree growing alongside the canal.

Continuing upstream, next up is the Big Chief spring, which is where most (I guess more than 99 percent) of the flow is coming from. When we stopped in to take a peek at the flow (the first time I had visited the pool and springhead with flow), a long-haired black cat came running out of the curb drain sopping wet. Apparently, the feral cat colony hot tubs in the water during cold mornings! 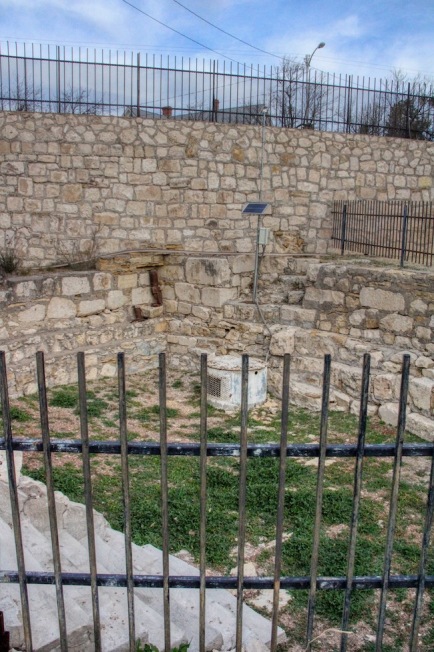 Government Spring requires a much higher water level in the aquifer to flow.

Big Chief Spring. Appears to be standing water, but it’s flowing. When the water level is just right, this spring sounds like a cheap washing machine as water cavitates from it.

Upstream from Big Chief are a couple more springs: Koehler’s and Blue Hole springs, both of which were (slightly) flowing during my visit. 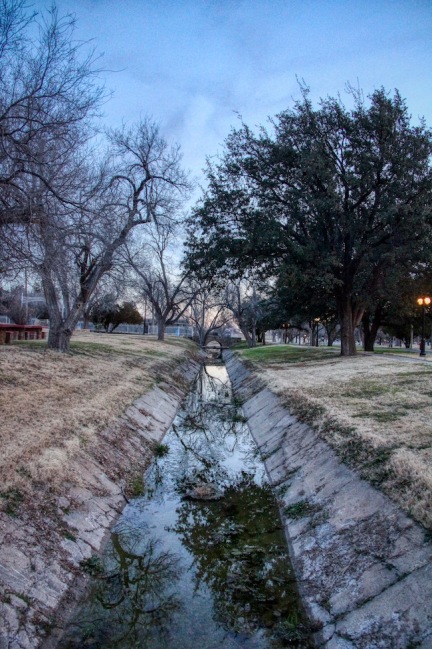 Looking down the main canal just downstream from the confluence of flows from Koehler’s and Blue Hole springs.

After those springs, there’s a wee amount of flow upstream and then damp spots in the canal.

At the commissioner’s court meeting, a landowner shared a report on the integrity of the dam on Comanche Creek upstream from the spring system. The reservoir behind the dam is also notable in that it hosts a number of sinkholes into the Edwards Aquifer, sinkholes that continue to form over time. There have been epic floods through here in the past, even topping into the pool area. 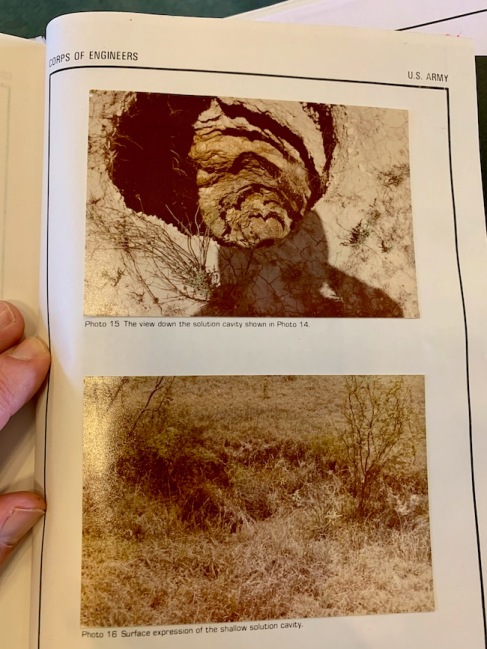 Finally, I drove around the Belding area to gawk at the canals for Leon Springs, another spring system that dried up after the aquifer became more heavily pumped. On earlier trips, I had misinterpreted the canals in the area for groundwater pumping, but, in fact, they were for directing flow from Leon Springs to an irrigation area, now long gone, on what is now the north side of Interstate-10 (technically, some of the flow back in those days was also from water wells local to the springs, something the local irrigaters did to enhance downstream flows). Up-gradient (to the south) from Leon Springs there are canals for the distribution of pumped groundwater.

I also checked in on the Belding area irrigation as well as checking out some of the formerly groundwater-irrigated areas on the flanks of the “sweet spot” for groundwater production. 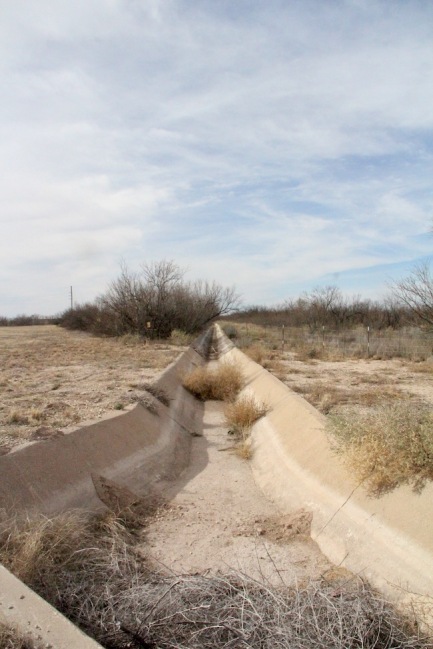 A dried up canal that used to direct flow from Leon Springs to irrigated lands north of the interstate. This is looking upstream toward Leon Springs from the roadside near the intersection of Ranch Road 2037 and the southside I-10 service road. 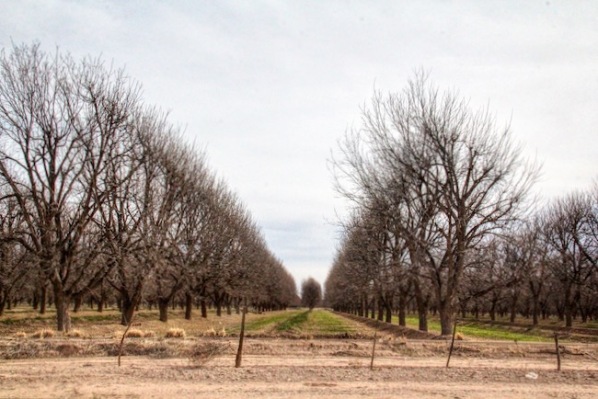 A pecan farm in the Belding area irrigated with groundwater.

A groundwater well in the Belding area.

And last but not least, on the way out of town, I enjoyed a plate of Enchiladas Montanas at Tacos OJ. Sorry: no video!

Somewhat poetically, I found a partially-solved Rubik’s Cube floating in the spring flow during my trip. Sharlene Leurig and I are looking at what it would take, hydrologically, politically, economically, and structurally, to bring year-round spring flow to Comanche Springs. We continue to work on that puzzle… 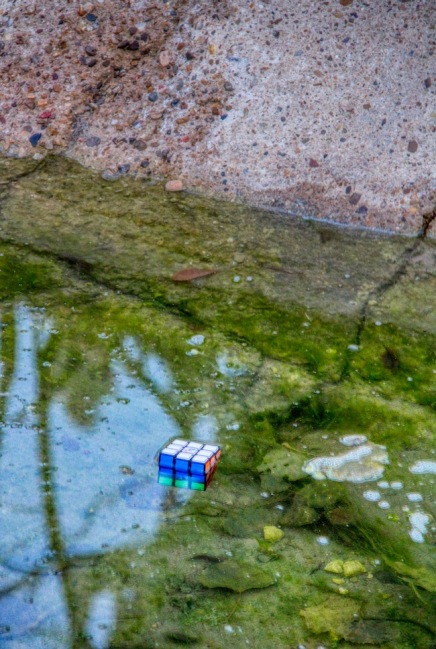